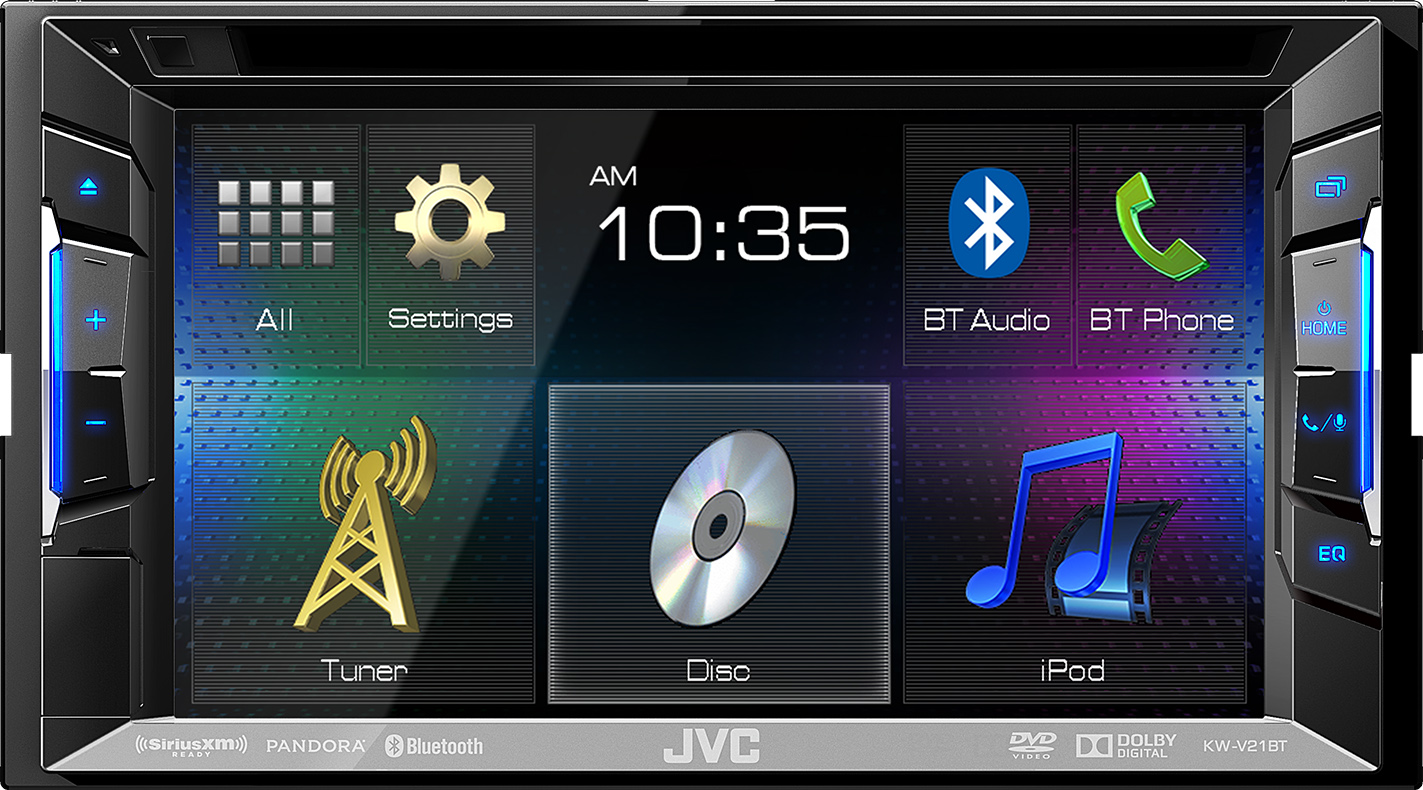 • “All four units are indicative of the combination of technology and favorable pricing we’ve built into our upcoming 2015 product line. With entry level units able to directly interface with select Android smartphones, we give consumers an expanded media experience at highly attractive price points.”

As next-generation models of the current KW-V10 and KW-V20BT receivers, the new KW-V11 (MSRP $299.95) and KW-V21BT (MSRP $349.95) double-DIN units feature a stylish, symmetrical design that accommodates a larger, 6.2-inch WVGA touch screen. A fully reimagined touch panel allows users to place their favorite function tiles on the screen for a customized control experience. The screen also includes Monitor Touch Control, so users can adjust volume by performing a circular motion on screen and select media by swiping up/down or left/right with their finger. Additionally, each receiver can be controlled with factory-equipped steering wheel buttons using a third-party adapter, or with the optional RM-RK258 wireless remote control.

Both receivers are designed to connect seamlessly to the iPhone to access stored music and video as well as receive streaming media and Internet resources using the smartphone’s broadband access. Each includes the ability to control specific apps on an iPhone 4 or 4S from the receiver and play back audio from the iPhone 5 and 5s.

Other benefits include a USB input that charges the connected device, an audio/video input, playback of multiple audio formats from a CD, DVD or connected device, a 5-band parametric equalizer and 11 preset equalizer settings that provide pinpoint control of sound quality, and connections for external amplifiers (front / rear / subwoofer) with 4.0-volt outputs for precise level matching.

The KW-V21BT adds Bluetooth-enabled hands-free phone compatibility for safer phone calls and audio streaming, with a new “auto pairing” function for iPhone that eliminates the need to scroll through Bluetooth menus and match pairing codes. In addition, plug-in compatibility with SiriusXM receivers provides access to hundreds of channels of specialized audio programming.

Siri Eyes Free is another feature of the KW-V21BT, allowing the user to control the iPhone and the receiver using his or her voice. Press one button on the receiver to wake Siri, the iPhone’s virtual assistant, and provide voice commands to select music, send and receive text messages, set reminders and more.

The entry level KD-R660 (MSRP $89.95) and KD-R460 (MSRP $84.95) are next-generation models of the current KD-R650 and KD-R450, respectively. A new symmetrical design adds screen space and physical buttons. One of the most notable improvements from last year’s models is Android Auto Mode. Android®-based smartphone users can connect their phones to the receiver via USB. The user can browse, play and control stored media on the smartphone from the receiver after installing the free JVC Music Play smartphone app available on Google Play. Without the app, users can stream services or play back stored media by simply plugging in their phone or tablet and controlling source functions from the device.

Both receivers include an easy access front-panel charging USB port and 1/8-inch auxiliary input, two sets of pre-amplifier outputs (front and selectable rear / subwoofer) for the KD-R660 and one set (selectable rear / subwoofer) for the KD-R460, an included remote control, connectivity to factory-installed steering wheel buttons, and a dimmer that synchronizes with the vehicle’s headlights.

Additionally, the KD-R660 connects to the iPhone to play and control stored media as well as Pandora® and iHeartRadio®, using the iPhone’s broadband connection.

“It was very important to us to make these products available to our vendors and loyal JVC Mobile consumers prior to the holidays,” said Jacob Hardin, national marketing and training manager at JVC Mobile. “All four units are indicative of the combination of technology and favorable pricing we’ve built into our upcoming 2015 product line. With entry level units able to directly interface with select Android smartphones, we give consumers an expanded media experience at highly attractive price points.”

JVCKENWOOD USA Corporation is a wholly-owned subsidiary of JVCKENWOOD Corporation and is a leading developer of imaging, home and car entertainment and navigation products for the consumer market, two-way radio communications systems for public safety, private industry and amateur users, and video equipment for the broadcast and professional markets. For detailed information, call JVCKENWOOD USA at 1-800-950-5005 or visit us at http://us.jvckenwood.com, www.kenwoodusa.com and www.jvc.com.